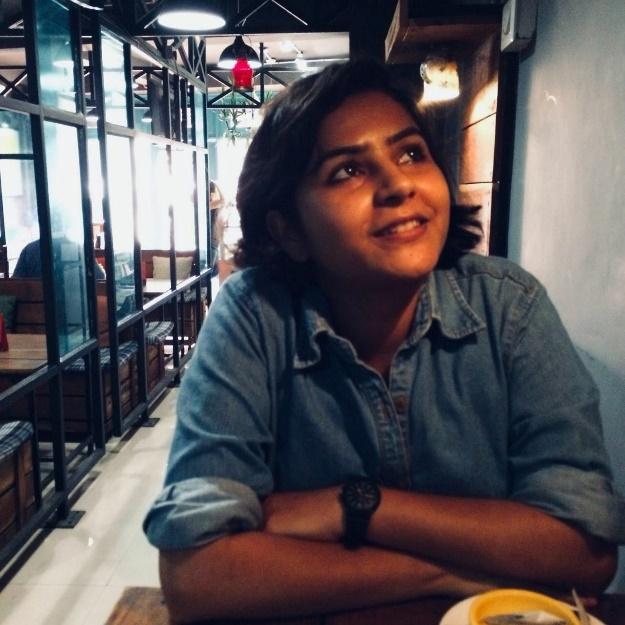 The urinary bladder explodes and I urinate
here, there, everywhere….
There’s a saying,
“Dance like no one is watching.
Just like that….
Pull down that zipper of shame
Allow the fragrance to
diffuse such that the
next eastern wind reeks of ammonia.

These excerpts from Prakriti’s poem Peshab ki Thaili (Urinary Bladder) on public urination quite neatly describe the sardonic lens she turns on society and its performances. There is great restlessness in her poetry. It refuses compartmentalization. She moves from subject to subject, treating each with that unique point of view. If the poem above was a sly way of drawing attention to way men lay claim to public spaces as a matter of right and defeat civic sensibilities, then Premature Ejaculation calls out toxic masculinity and insincere discourses about feminism that in the end are as dissatisfying and futile as premature ejaculation. Pockets is a conversation about women wanting to stitch pockets in their clothes- standing for their rights and convenience. Her short story Bharat Mata points to the lecherous Indian abroad. Thehre Huey Se Log (They Who Seem Still) is a very disturbing take on what it takes to be a woman in the world today.

Poet, writer of short stories and scripts, Prakriti Kargeti has presented her poems at platforms such as UnErase poetry, TEDxDelhi and has won the prestigious Rajendra Yadav Hans Katha Sammaan. Prakriti is considered to be one of the finest emerging female poets in Hindi. Her name finds mention in most of the female-oriented literary discourses in Hindi, today. Coins of Civilization and I am a Rabbit are part of her acclaimed collection Shehar Aur Shikayetein published by Rajkamal Prakashan.

The poems featured here have been translated from Hindi by Smitha Madanan, who is a nomad by spirit and loves travelling across India. She loves to read, is a foodie, an avid backpacker and cinephile. Dr Smitha Madanan currently teaches English Literature at Govt. College, Vadakara, Kozhikode.

This edition of SamyuktaPoetry thus, marks the coming together of two free spirited individuals who turn the Gaze on social transactions and look at the way people live from day to day- giving some of themselves, retaining a bit, but mostly, mostly, seeing life dissolve into thin air.